skip to main | skip to sidebar

High School buddy, Phil Walters- now known as Captain Phil- spent many years following our graduation from A.P. Leto H.S. as a wine salesman. Phil managed okay in the corporate world, but civilization never completely agreed with him. He liked to romp around in the woods hunting things like wild boar. He found he had a talent for bagging large reptiles- alligators, specifically- and he ultimately shed his coat and tie to hunt gators professionally. He's become a leader in the gator guide business across the Southeast. I'm no sportsman, but Phil offered me and the Lads a grand opportunity to take us on a gator hunt, if only I could procure a gator tag. I did. The season opened yesterday, and so the adventure began. Phil rolled in late Friday night, after guiding a client to the capture of a near-record in excess of thirteen footer in Georgia. Saturday morning, after breakfast, he ran through the rules with me and the Lads, and had them practice harpoon throwing with some of his gatorsticks (Phil makes gator gear, including harpoons). The Boro is very near the ACE Basin, a confluence of the Ashepoo, Combahee and Edisto Rivers, and home to lots of wetlands and more than a few alligators. 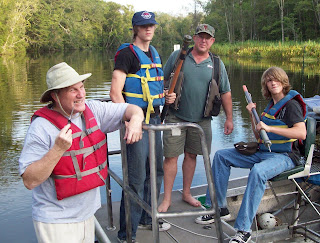 Me, Taylor, Captain Phil, and Tyler put in on the Combahee River, only a twenty minute drive from the Boro. 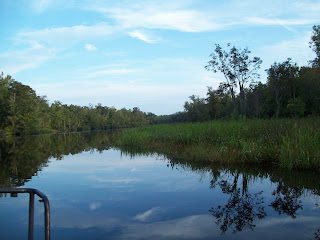 It was a truly gorgeous day, whether we caught anything or not. 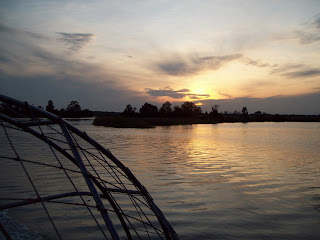 Sunset on the Combahee. CAUTION: The following gets a little bloody. If this sort of thing offends you, you probably ought not to read it. The easiest way to find gators at night, is by the reflection of their eyes. Phil's been doing his thing professionally for more than ten years, and he can get a good idea of the size of an alligator from the reflection of their eyes. We saw maybe thirty or so gators on our trek, but many were too small- or too wary- for us to get a good chance to catch. At about Ten p.m., Phil caught a glimmer just off the bank of the river. He hit the gas in his airboat, and cut sharply toward the little red reflection. Moving deftly as he sped toward the beast, Phil flung his harpoon fifteen feet away and into the water: a direct hit! I knelt at the bow of the airboat, and scooped up the line that was attached to the "dart". I reeled it in, and finally pulled the gator up near the surface. He splashed and swam and twisted, but we had him. Taylor put another harpoon in him. Then Tyler put a third dart into him. The Lads named him "Grant", after an unfortunate school-mate. Poor Grant was having a bad day. Phil gaffed him. Taylor taped his mouth shut, and the Lads hauled him into the boat. Gator Grant was dispatched with a knife to the base of his skull. We got back to the landing at around Eleven; received by a trio of hunters from the Upstate, who clearly coveted our catch. I regarded them warily, as they took pictures of our nine-and-a-half foot gator. "Grant" was no trophy, but was well over the four foot minimum, and a respectible catch. 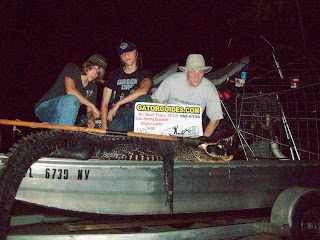 I videoed a little of the business.
Posted by superdave524 at 9:22 AM

Nice video and pix ... and a good bonding oppty ... can't say I like the idea of killing a wild creature of any kind. I've even stopped fishing and was careful on today's run not to step on a few bugs. But a nice father/twins kind of thing, and if you're into that ... :-)

It was definitely good father/sons time. I actually did feel a little bad for the gator at one point. 'Course, Phil says he's just making the world safer for poodles and babies.

you know you're a redneck when ...

Awesome website, I had not come across intheboro.blogspot.com earlier in my searches!
Carry on the superb work!

This is very fine web site, thank you and look at that [url=http;//ciufcia.pl]gry dla dzieci[/url]

Wow all I can say is that you are a great writer! Where can I contact you if I want to hire you?

I ran the Kiawah marathon in December, 09. Yippee!

superdave524
I was born in Montana, raised in Tampa, and reside in a small town in the lowcountry of South Carolina with the Lovely Lady Di, and son Tyler. Walterboro (the 'Boro) has about 5,100 residents. It's a moderately interesting place. I work in the public defender's office representing poor people charged with crimes. Some of them did it. Some of them didn't do it. Some are not very nice, a lot of them are just regular Joes with a huge plate of bad luck. I'm a moderately interesting fellow, who has the good fortune to know or be related to some very interesting people. Is there anyone out there?